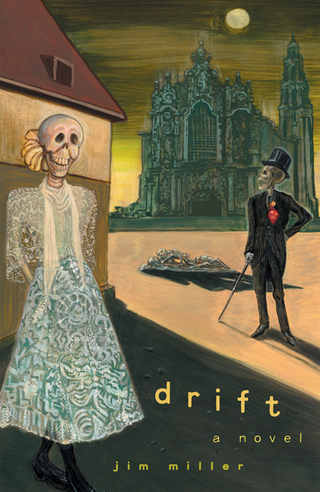 "In a dérive one or more persons during a certain period drop their usual motives for movement and action, their relations, their work and leisure activities, and let themselves be drawn by the attractions of the terrain and the encounters they find there."
Guy Debord "Theory of the Dérive"

Drift is a novel composed of various intersecting narratives that combine to create a mosaic of the San Diego city space and the sea of lives that inhabit it. The central narrative charts a few months of the aimless life of Joe Blake, a downwardly mobile part-time English instructor and aspiring poet, as he falls in love with a former student, Theresa Sanchez, a single mother struggling to find herself in the midst of the daily grind. As the connection between the two of them becomes more profound, they discover a common yearning for a more authentic life, a deeper sense of being. On their journey they explore the meaning of identity, community, sexuality, spirituality, and justice.

This central story is interrupted throughout by minor tales that intersect with the main narrative. When Joe wanders through Tijuana, the reader also encounters a drunken sailor and a prostitute. Later on, the novel follows the descent of one of Joe's students into homelessness and insanity. This narrative is juxtaposed with that of a pious office worker fleeing to the suburbs at rush hour. As the novel continues, the minor characters include a retired cannery worker, a flophouse resident, a cultural critic, an editor, a labor organizer, a Vietnamese immigrant working in a restaurant, a Somalian taxi driver, a maid in a desert motel, a speed addict, an elderly blues man, a suicidal businessman, and others. Their stories range from the sacred to the profane and take the reader to a wide range of locations and consciousnesses.

In addition to these minor tales, the novel also includes a series of historical narratives that tell the story of the Mission Indians, the city founders, Emma Goldman, the Wobblies, the Theosophists, Henry Miller, Herbert Marcuse, the city's days as a health resort, farm labor wars in the 1930s and 60s, and the disaster of the Salton Sea. This historical metanarrative does not directly comment on the stories of the novel, but rather provides context for the story of the city itself and story of the time from which Joe ultimately cannot escape. Set in the late nineties, the novel captures the hollowness and unease that underlay the boom years. In sum, Drift is a philosophical, historical, and political novel that challenges traditional narrative forms and takes the reader on a journey that, hopefully, will result in both discovery and more questioning.