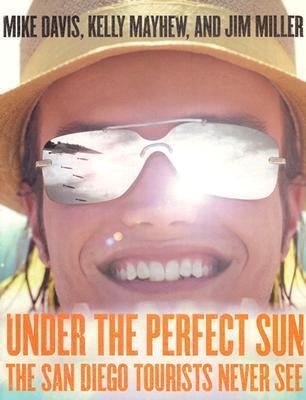 Under the Perfect Sun: The San Diego Tourists Never See

From Under the Perfect Sun:

Perhaps no other urban space embodies the logic of the theme park more than "America's Finest City." As the magical spell of Los Angeles has been broken by traffic, smog, earthquakes, and riots, San Diego has energetically sought to maintain its image as a quiet little beach town, free from the urban blight, pollution, and class and race conflicts which have forever soiled the reputation of its unruly neighbor to the North. On a sunny day in San Diego, a tourist might choose to wander through the Spanish Colonial past that never was in Balboa Park, shop by the harbor in a reconstruction of a New England fishing village in the vicinity of where the city's tuna and cannery industry once thrived, or have margaritas near "Ramona's marriage place" in Old Town and stroll over to the conveniently relocated Victorian neighborhood in the Heritage District. That same tourist might also eat at an expensive bistro in the Gaslamp Quarter where red-light district was and the Wobblies were viciously beaten by police and vigilantes at the turn of the century, take a cruise on San Diego Bay past the Navy ships leaking invisible poisons into the water, or spend a day in the "natural beauty" of Mission Bay Park which was constructed at the expense of ninety-nine percent of the local wetlands and frequently suffers from sewage spills. Unlike Los Angeles, however, San Diego has largely managed to conceal these contradictions and market an image of itself that pushes the "real" city to the margins and buries its history under a mountain of booster mythology. If history is not dead in San Diego, it is certainly on life-support.